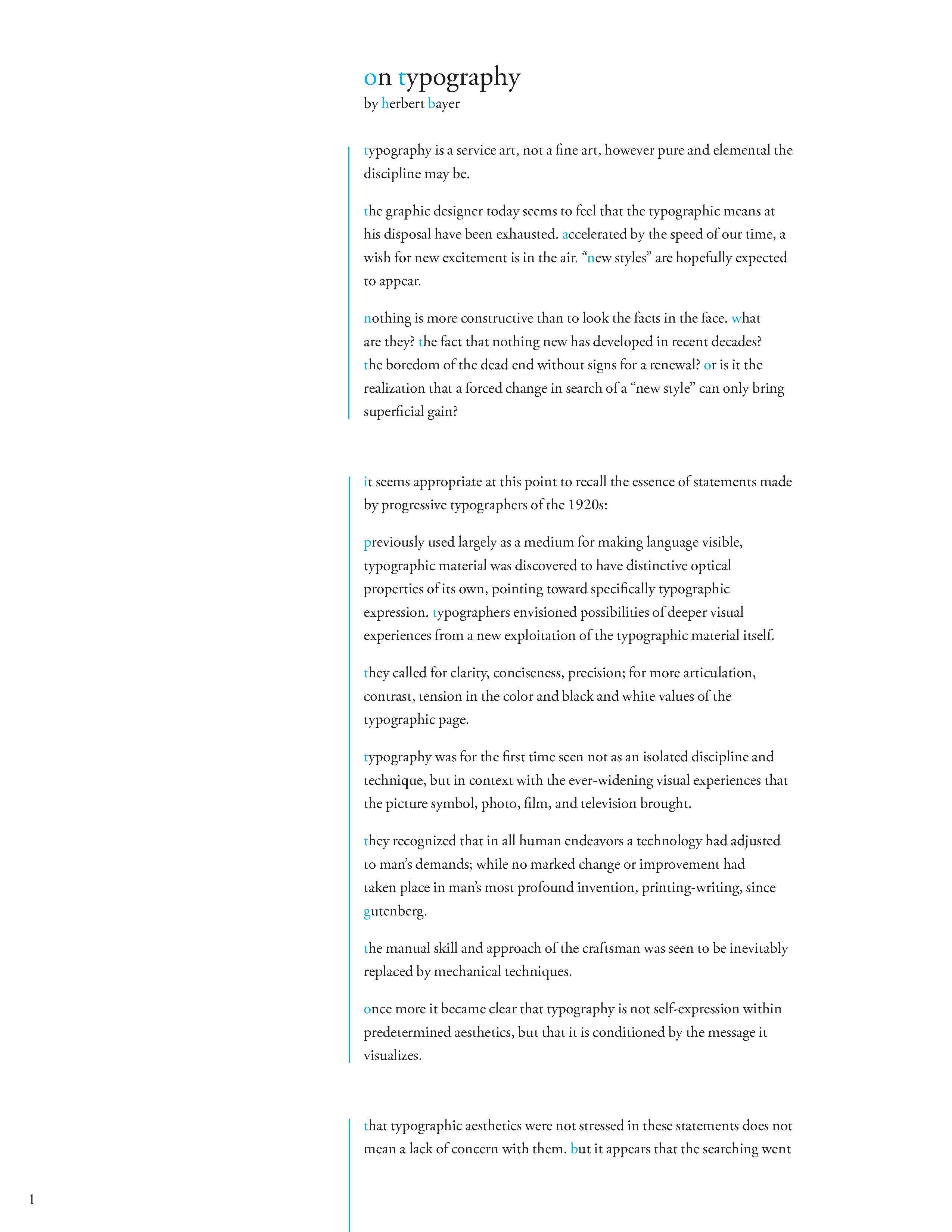 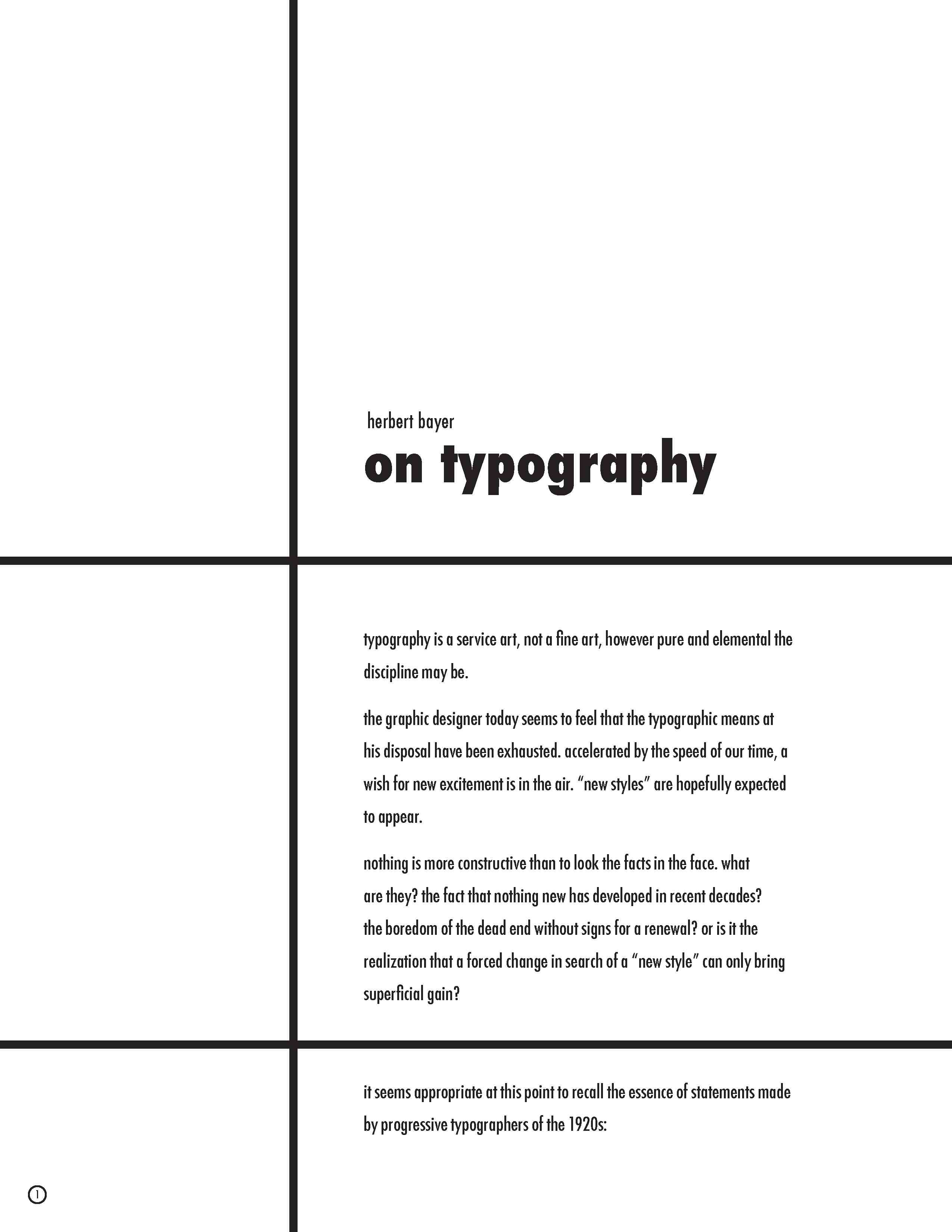 As coursework for the Graphic Design: Typography class at Princeton, I created three digitally typeset essays expressing different ideas from the history of typography through my own visual lens. There are two versions of Herbet Bayer's On Typography, one designed as from the perspective of Bayer himself, and one from the perspective of Jan Tschichold. The third expresses the ideas of Karl Gerstner's Designing Programmes.

Bayer was interested in rationalizing typographic communication — rethinking not merely typefaces but the alphabet itself (especially in the context of modern mass production tools). He wanted to work without what were, in his view, historical biases, and optimize for effective, rational visual functionality. A good example of this is Bayer's Universal alphabet, which only uses lowercase letters and condenses some of English's phonetic ambiguities.

I aimed to be true to these ideas in setting the Bayer text. Originally, uppercase and lowercase letters were designed as separate alphabets. Lowercase tends to be more legible as the letters are designed to sit well next to each other, and I imagine that went into Bayer's desire only to use the lowercase alphabet. I set the essay in lowercase Garamond, a combination I chose for high legibility in service of how Bayer valued clear communication as an utmost goal.

At the same time, I chose to highlight in blue the letters that would have been uppercased were I using the conventional alphabet. Rather than blindly following Bayer's lead, I assert that capitalization gives visual information to the reader: sentence boundaries, emphasizing important names, etc. I decided to essentially put back the information that Bayer would take out, using color as an indicator.

I also defined my own sectioning of the text, grouping paragraphs with similar ideas together by my own judgment. Using the blue thin rules to the side, I established grouping and hierarchy information using graphical elements. This is in line with Bayer's belief that it is the responsibility of the designer to guide the reader through clear understanding of the content of the text.

Tschichold's Principles of the New Typography was interested in revisiting the form of the printed text. He valued clarity and functional design.

In setting the Bayer text again under the lens of Tschichold, I used functional rules to break up sections and the rational forms of Futura type to create a design that referenced the other but expressed a different point of view.

Rather than designing individual solutions to design problems, Gerstner was interested in designing the systematic constraints that span the possible solution space of a problem. It's fascinating to see how these ideas have progressed with computer technology.

My approach was to create a visual system — two columns of justified text on each page — within which I could modulate and create the effect of various solutions created by the system. I also created three title pages, with the interpretation that all three are valid title page solutions. I chose the three typefaces Helvetica, Caslon, and Monaco as variations for the columns because typeface each to me represents a prototype of its class of typeface. Helvetica is the ubiquitous Swiss sans-serif, Caslon the original English serif typeface, and Monaco the monospace Macintosh system font.

The visual challenge was coercing each typeface to appear optically the same size. It was not enough to set them all at the same point size, because the numerically equal point sizes do not take into account the varying x-heights, weights, etc. that influence the way a human will optically perceive the font's shape and size. 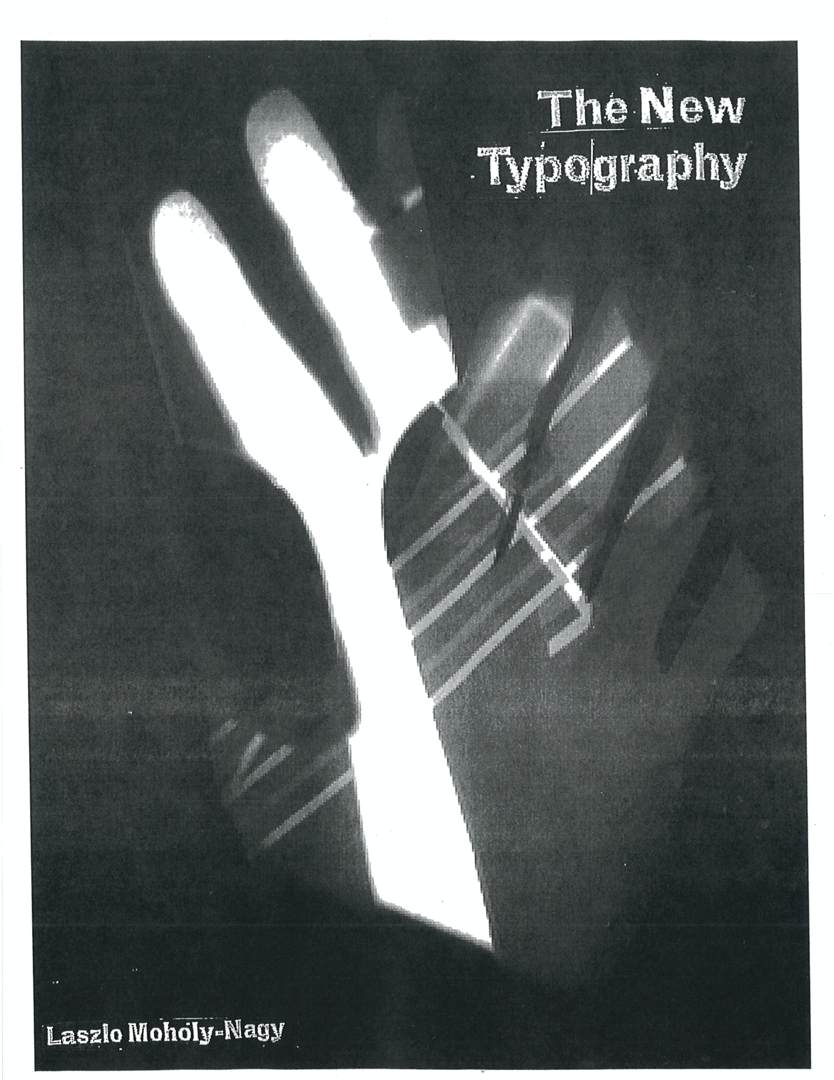 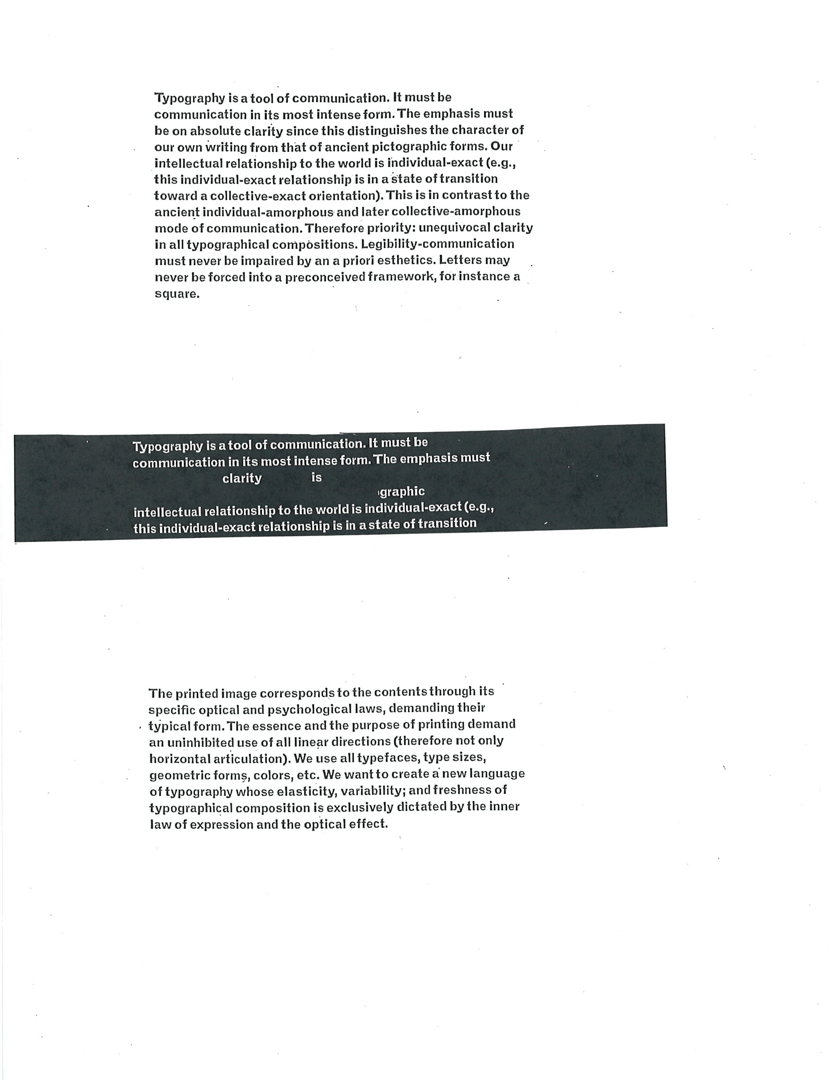 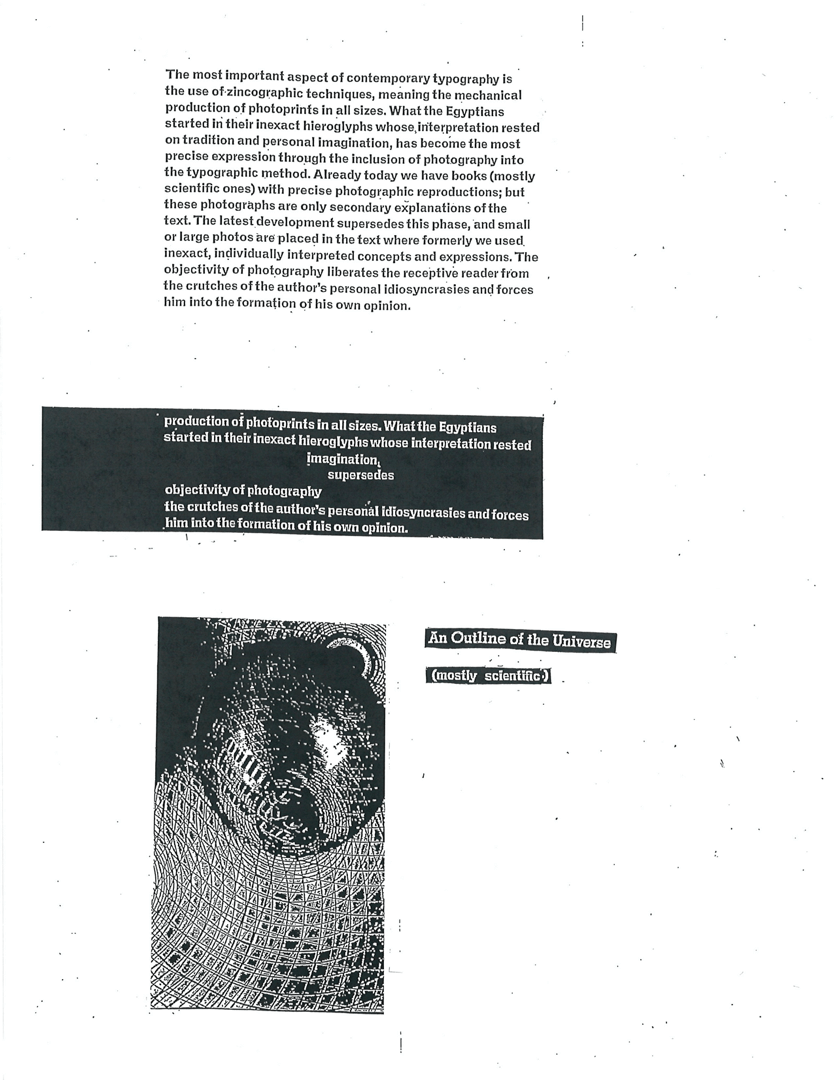 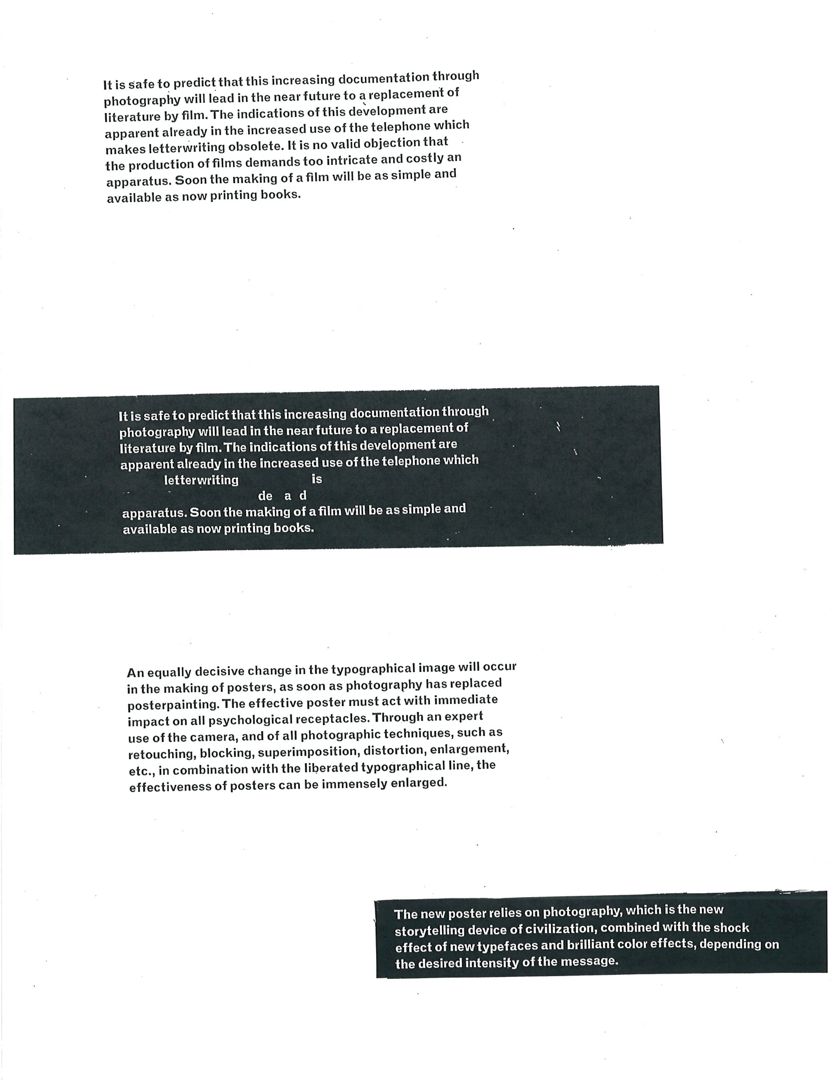 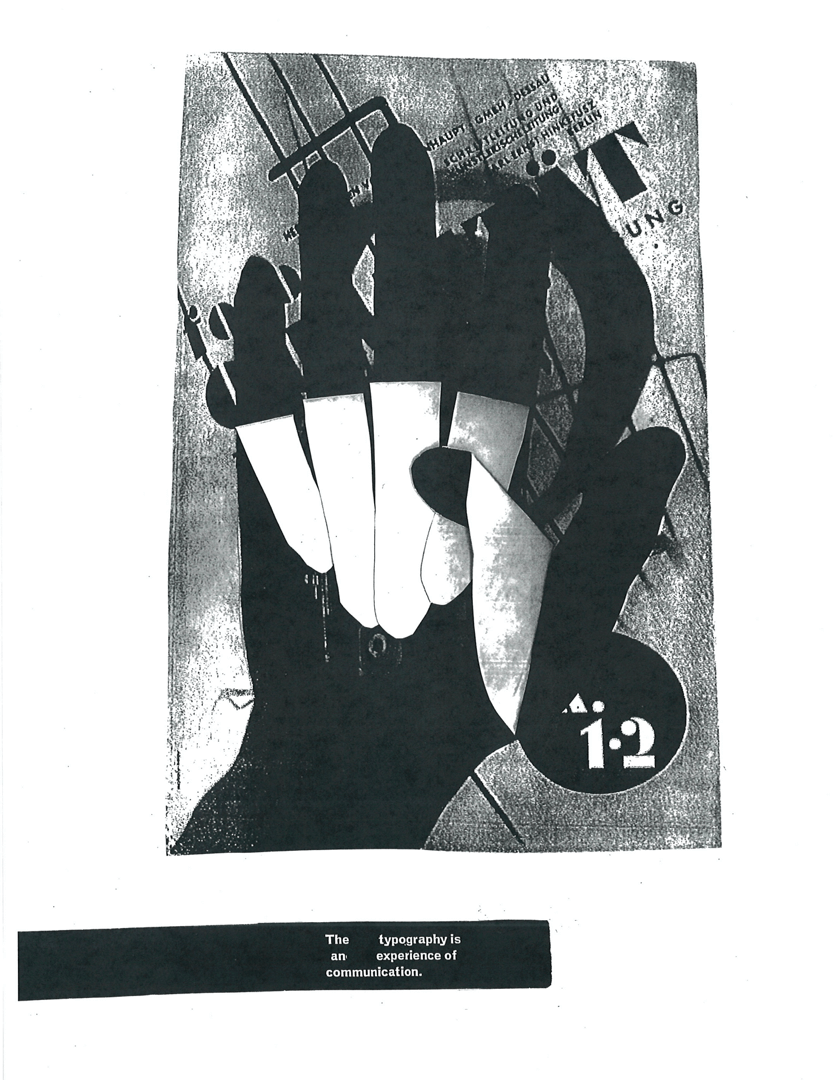 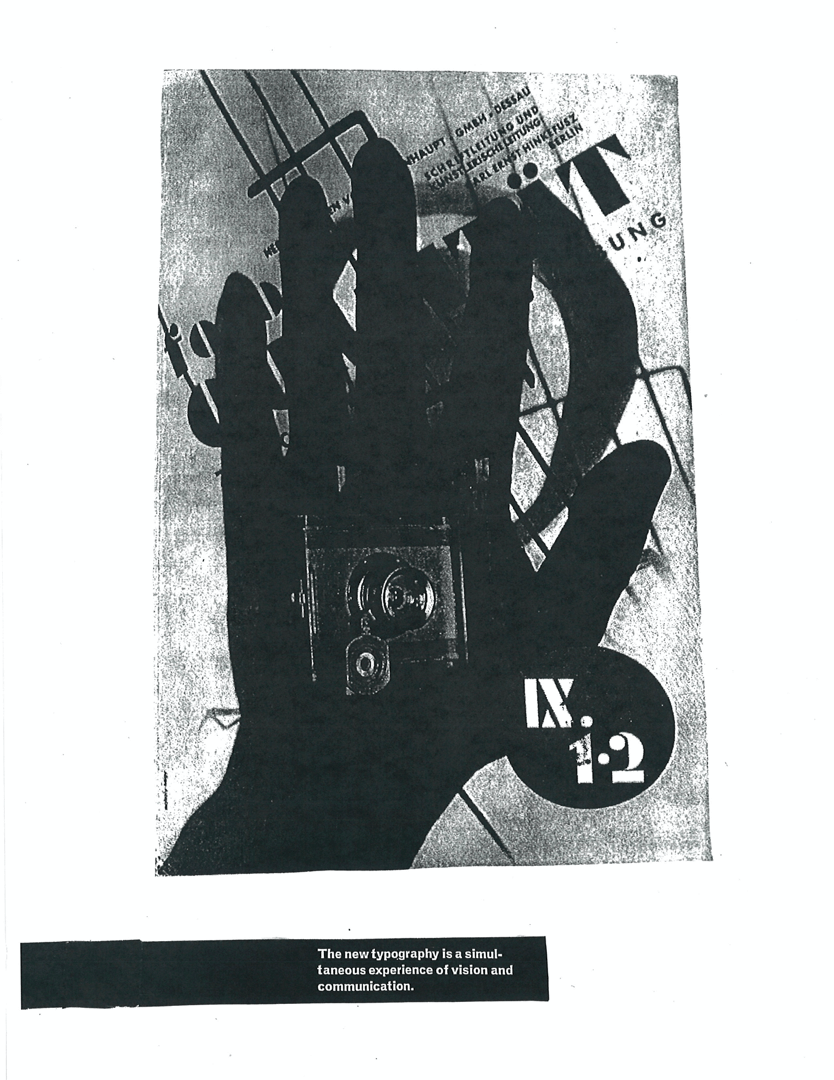 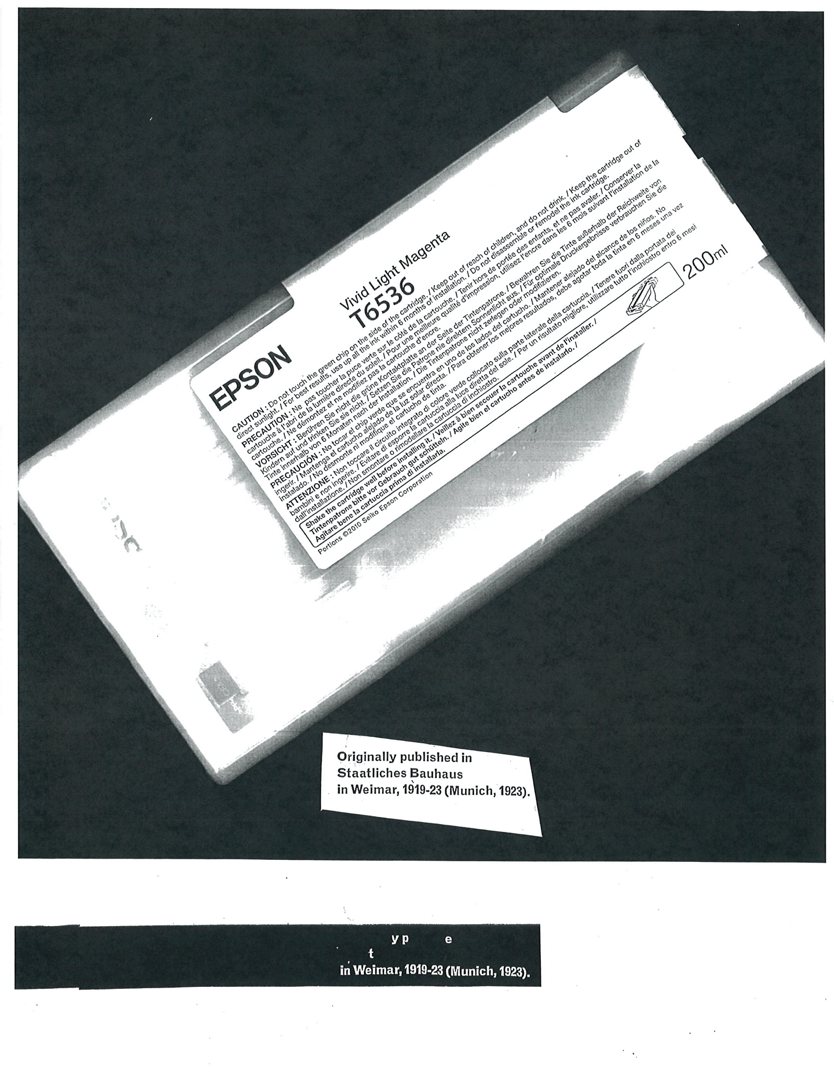