Biometric Sans is an experimental typography system which elongates letterforms in response to the typing speed of the individual. It is a gesture toward the re-embodiment of typography, the re-introduction of the hand in digital writing.

The work is inspired by the practice of keystroke biometrics, the idea that individuals are uniquely identifiable by the way that they type. Typing is an instance of what Marcel Mauss calls “techniques of the body”­—how movement and gesture express an individual’s socially and culturally inflected subjectivity. Typing is just as embodied as handwriting. But where handwriting expresses individuality through letterforms, digital word processing makes everyone’s writing look the same.

Writing in Biometric Sans foregrounds the mediation of writing in software. This intervention comes with an awareness of the temporality of writing. Cadences of stretched letterforms might express tone that would be otherwise lost. Typing might become a feedback loop of writing and rewriting, seeking for the right letterforms to visually express an idea. All the while, the algorithmic variation indicates the omnipresent apparatus of digital surveillance on which this artwork is based.

Biometric Sans is installed in the gallery as an interactive digital typewriter. I think of typewriting as the hinge between handwriting and digital word processing; just mechanized enough to look standard, but just analog enough to express the presence of the writer through the spontaneity of pressure on the keys and gravity on the ink. 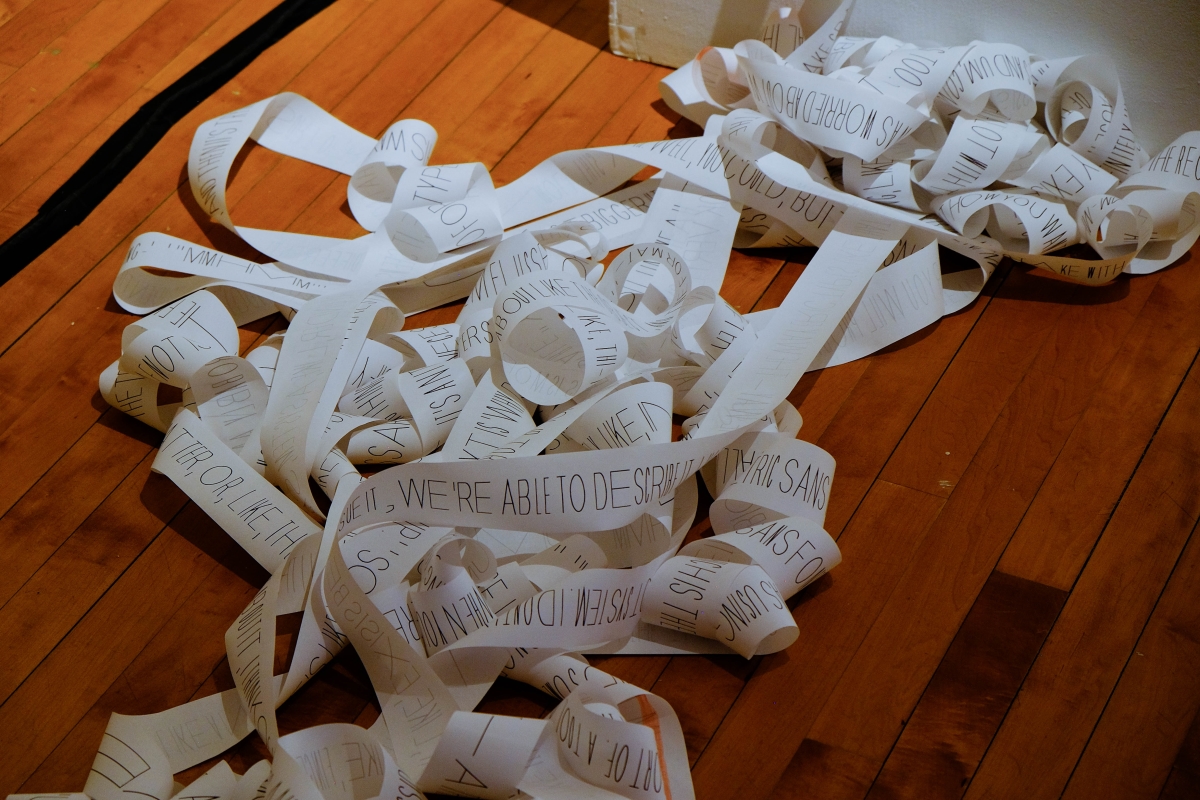 The promise of data is the promise to turn bodies into facts: emotions, behavior, and every messy amorphous human reality can be distilled into the discrete, clean cuts of calculable information.

From The Shape of Things, translation by flusserbrasil.com:

The explanation is simple: clicking is more easily mechanized than sliding. Machines are stutterers even if they appear to slide. This becomes clear when cars and film projectors start to go wrong.

But this explanation is inadequate. Because what lies behind the question is: why do machines stutter? The answer is: because everything there is in the world (and the whole world itself) stutters. This only becomes clear when one takes a closer look. Democritus already suspected it, but not until Planck was anyone able to prove it: Everything quantizes. Thus numbers, but not letters, correspond to the world. It is open to calculation but not to description. Therefore, numbers have to break out of the alphanumeric code and make themselves independent. Letters entice one into endless discussion about the world and have to be put to one side as not equal to the task.

This is precisely what is happening. Numbers abandon the alphanumeric code in favour of new codes (the digital code, for example) and they feed computers. Letters (if they want to survive) have to simulate numbers. This is why typewriters go ‘click’.

A few things need to be said here. For example, the fact that everything in the world stutters has only become apparent since people have started to count everything. In order to count it, everything has been split up into little bits (calculi), and then a number has been attached to every little bit. Perhaps, then, the fact that the world is a scattering of partides is a consequence of our counting? Not so much a discovery then, more an invention? Do we discover in the world what we have fed into it ourselves?

Perhaps the world is only open to calculation because we cobbled it together in our calculations. It is not numbers that correspond to the world: we have set the world up in such a way that it corresponds to our number code. These are rather unsettling thoughts.

They are unsettling for the simple reason that they lead to the following conclusion: the world is now a scattering of particles because that is how we cobbled it together in doing our calculations. Before that, however (at least since the Greek philosophers), the world was described alphabetically. Therefore, at that time it had to adhere to the discipline imposed by the rules of discourse—i.e. the rules of logic rather than the rules of mathematics.

In fact, Hegel was still of the opinion, apparently mad to us now, that everything in the world was logical. We are now of the opposite opinion: everything in the world can be traced back to absurd chance events that can be worked out by the calculus of probability. Hegel was thinking in words (in dialectic discourse), whereas we think in calculations (we process punctuated data).

The whole thing gets still more unsettling when one considers that Russell and Whitehead proved in Principia Mathematica that the rules of logic cannot entirely be traced back to the rules of mathematics. As is well known, these two men tried to manipulate logical thinking by using mathematics (the ‘calculus of propositions’) and came up against this irreducibility.

This would be jumping to conclusions, though. Only since we have calculated have we had machines (typewriters, for example), and we could not live without machines, even if we wanted to. We are therefore forced to calculate rather than to write, and if we insist on writing, then we have to go ‘click’. To all appearances, it seems as if the world had in fact to be cobbled together for the purposes of calculation but that the world itself demanded that it be cobbled together.

At this point in the brain teaser, it is a good idea to hold our horses a bit. Otherwise, one runs the risk of falling into an abyss (into the realm of religion). To avoid falling like this into a Pythagorean worship of numbers, it is necessary to examine the movements one makes while calculating, as opposed to those one makes while writing.

In the days when one still wrote by hand, one made a line going from left to right (that is, if one lived in the West) that wound its way from one side of the paper to the other with occasional breaks. This was a linear movement. When one calculates, one picks little bits out of a large heap and assembles them in little heaps. This is a punctuated movement. First, one calculates (picks out) and then one computes (assembles). One analyzes in order to synthesize. This is the radical difference between writing and calculation: calculation is directed towards synthesis, but writing is not.

People who subscribe to the cause of writing try to deny this. In calculation, all they see is the doing of sums, and this they call cold and unemotional. This is a downright mischievous misunderstanding. What calculation is all about is computing cold sums into new things that have never existed before. This white heat of creativity is closed to people who do not go in for calculation as long as they see calculation merely as a question of numbers. They are unable to experience the beauty and philosophical depth of some outstanding equations (Einstein’s, for example).

But now that one can re-code numbers in the form of colours, shapes and sounds with the aid of computers, the beauty and depth of calculation are there for all to feel. One can see its creative force on computer screens, hear it in the form of synthesized music, and in future one will probably be able to experience it ‘hands on’ through the use of holograms. The exciting thing about calculation is not that it cobbles the world together (writing can do this as well), but that it is capable of projecting other worlds from within itself for all to feel.

There is not much point in pouring scorn on these synthetically projected worlds for being simulations of the actual world, for being fictions. These worlds are concentrations of dots, computations of sums. But the same goes for the ‘actual‘ world we are thrown into. It too is computed by our nervous system calculating on the basis of punctuated stimuli, and this is then perceived as actual. Thus either the projected worlds are just as actual as the ‘actual‘ world (if they assemble the dots in the same concentration as the ‘actual‘ one), or the ‘actually‘ perceived world is just as much a fiction as the ones projected.

What the cultural revolution now under way is all about is that we have gained the ability to set alternative worlds alongside the one taken by us as given. That we are going from being the subjects of a single world to becoming the projections of many worlds. That we have started to learn how to calculate.

Omar Khayyam says: “Ah love! Could you and I with fate conspire / To grasp this sorry scheme of things entire, / Would not we shatter it to bits—and then / Re-mould it nearer to the heart's desire?”

People are starting to see that we are in the process of shattering the sorry scheme of things entirely to bits. Not, however, so that we can re-code it just as our heart desires. People should at last learn how to do arithmetic.