How Do Deepfakes Do Harm?

Advances in machine learning are increasing access to tools for creating realistic synthetic images of people. Researchers, journalists, and platform companies need to consider ways to mitigate harms from misuse of these tools. Deepfakes are convincingly altered videos of people generated by machine learning that have been used to impersonate and/or misrepresent. In order to facilitate conversation about their use, it is useful to disentangle some of the concepts that they encompass.

What do we mean by “deepfake”?

Facial re-enactment keeps the face of the real video but imposes synthetic face movements. This technique can generate face movements driven by a number of input sources, such as a real face video (Kim et al. 2018) or an audio stream to lip sync (Suwajanakorn et al. 2017). Misinformation tends to fall under this category.

This definition is independent of the intent of the video. Not all deepfake videos are intended to cause harm. Creators on the internet have used the technology to recreate scenes in movies and launch memes of Nic Cage. 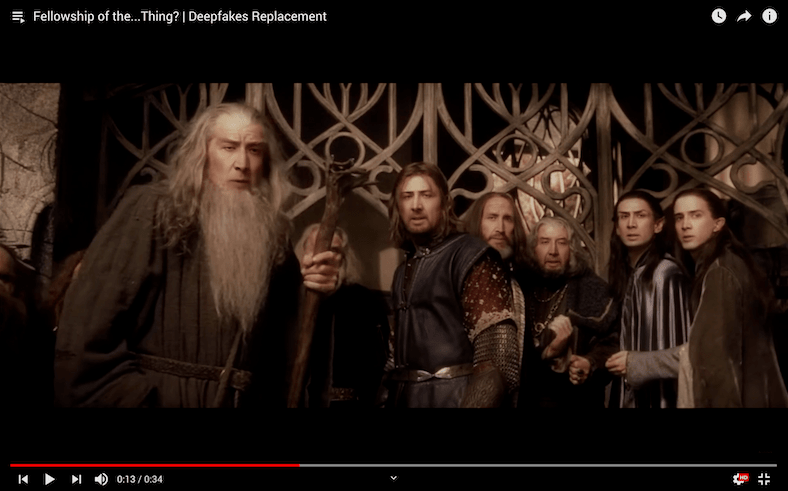 How deepfakes do harm

Deepfakes can be thought of as potentially doing harm in two ways: as misinformation, or as misrepresentation.

In the case of misinformation, the video manipulation has deceptive effect, and societal harm comes about from its perceived truth value. For instance, in 2018 a Belgian political party circulated a fake video of Donald Trump speaking about the Paris climate agreement. Although the creators of the video claim not to have intended to produce misinformation, the viral video deceived most internet commenters. Social psychology research has suggested that political images play a role in the formation of false memories around political events (Frenda et al. 2013). Deepfakes of this nature tend to be most harmful when its subjects are public figures and the videos are widely circulated. These videos are more likely to use more sophisticated, higher fidelity video manipulation techniques because verisimilitude contributes to their success. Potential responses to this form of harm include public fact-checking performed by journalists and careful documentation of misinformation by archivists.

How proportionally concerned should the public be about each of these possible harms? Many have pointed out that the popular narrative around deepfakes has centered on a hypothetical threat of deepfake misinformation, rather than the very real issue of non-consensual pornography.

Most of the few instances of politically motivated deepfake misinformation were widely and immediately called out as fake by journalists. Furthermore, there exist many conventional means to create video-based disinformation which would be cheaper and possibly more effective than deepfakes, like cutting out of context. For instance, in November 2018, the Press Secretary shared a video involving CNN correspondent Jim Acosta that was suspected to be altered by speeding up a segment of the video. While not false per se, many news outlets claimed the video was misleading.

While the deepfake misinformation threat has largely been hypothetical, there are active communities on the first page of Google search hosting thousands of non-consensual celebrity deepfakes. Victims range from mainstream Hollywood celebrities to K-pop stars and Youtube/Twitch streamers. There are also active messageboards associated with these websites where users request pornographic deepfakes of specific individuals. This use of deepfakes makes possible new harms that are larger in magnitude than the equivalent non-AI harms (like photoshopping a single image or making an unconvincing faceswap video). 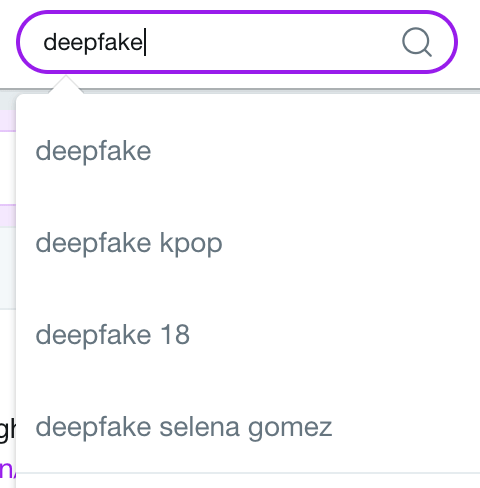 Questions and approaches across disciplines

Scholars have also discussed the difficulties that might arise as the existence of deepfake technology erodes trust in video, changing the role of authentication for videos treated as evidence in court (Maras & Alexandrou 2018).

In cognitive science, research suggests that “people have poor ability to identify whether a real-world image is original or has been manipulated” (Nightingale et al. 2017). This suggests a need for computer-aided techniques for image authentication.

Two broad classes of approaches have been proposed for this problem. One is based on verifying an image's integrity as it is taken, ensuring that its provenance can be determined as it circulates on the internet. Another approach is based on detecting modifications to an image.

The emerging field of automated provenance analysis seeks to use metadata to track the chronology of an image or video as it circulates online. There are startups seeking to create camera software that content producers can use to make images which journalists or end users can then verify at the point of reception. This is potentially useful for individuals and institutions intending to create trustworthy images. One could imagine a future in which it is expected of all journalism outlets to only publish verified images. Researchers have also explored approaches to inferring a provenance graph from pre-existing metadata, without the need for the active maintenance of a provenance chain from the point of production (Bharati et al. 2018). However, this does not prevent harms where the truth value of the image is irrelevant, like non-consensual porn.

The field of digital image forensics has produced methods for authenticating images by detecting modifications in the image itself. Classes of technique include: pixel-level anomaly detection, format-based statistical analysis of compression schemes, camera-based analysis of hardware-specific artifacts, physical anomaly detection between lighting and 3D objects, and geometric techniques based on object positions in the world (Farid 2009).

There is interest in deepfake detection work not only in academia, but also in industry and in the defense sector. Gfycat, a company that hosts animated gifs, has reportedly attempted to develop in-house deepfake detection. DARPA has established the Media Forensics group to fund research in image and video manipulation detection.

The usefulness of detection-based approaches depends on their adoption by large social media platforms, in order to mitigate circulation of deepfakes at the point of distribution. This depends on the labor of human content moderators to distinguish between harmful and non-harmful deepfakes, which will be difficult at scale and require advances in forensic interface design.

Changes in the sophistication and accessibility of AI techniques have resurfaced old questions and raised new ones about how images of people should be treated. I look forward to seeing work from researchers across disciplines responding to these potential harms, as well as developing my ongoing research and writing on questions of consent, autonomy, labor, and data re-appropriation in deepfakes during my PhD.